I had a truly unique experience on our final day in Kyoto. It was on this day that I hiked up a mountain to hang out with monkeys… 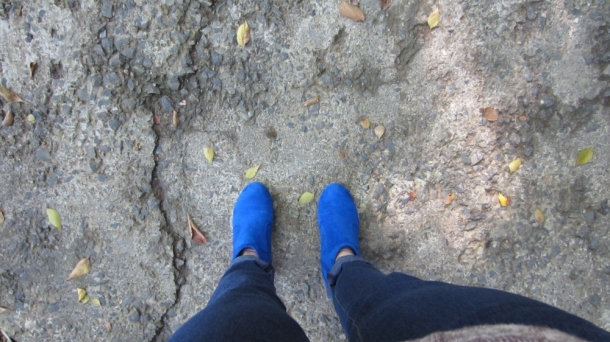 I have been a big fan of Japanese fashion for a long time. I was definitely more an onlooker during the “FrUits” phase (does anyone remember the magazine?!) but as the color schemes in street fashion started to mellow out, I found myself adopting a lot of the trends I found online and in magazines straight outta Tokyo. (And no, I’ve never cosplayed.)

Japan has a habit of being more cutesy than sexy, which I liked. So when I was out and about I was like:

“Girl on the left, I am basically wearing the same thing!”

“Girl on the right! OMG! Where did you get those cut offs?! LOVE!”

(both of these photos are from TokyoFashion!)

So basically, the entire time I was in Japan I was struggling to look as cute as possible but also find a way to stay comfortable because we were walking around for eight hours or more.

So on our final day in Kyoto, Napkin decided that we should take the advice of a friend of his and go see The Arashiyama Monkey Park Iwatayama!

We were supposed to check out of Heianbo that afternoon, but we talked to our hostess and she let us leave our luggage in a side closet so that we had more time to explore the city without lugging all of our things around with us! So we saddled up, I put on my high heeled boots and we marched down to Kyoto Station!

(Some of the neat architecture in Kyoto Station.)

We took the train to Arashiyama, which is on the western side of Kyoto near the Oi River. It is also BEAUTIFUL.

Literally the walk from our train stop was breath-taking.

Posing in front of big tree!

Anyway,  we weren’t terribly sure where we were going until all of these cute signs started popping up directing us towards Monkey-town! 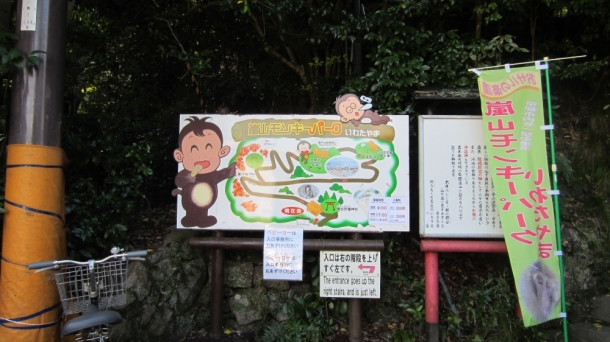 “Directing us up?” I thought…

“No worries!” I thought again.

As we started the climb, there were stairs and I was like,

But then the stairs ended and we were climbing higher up the mountain. 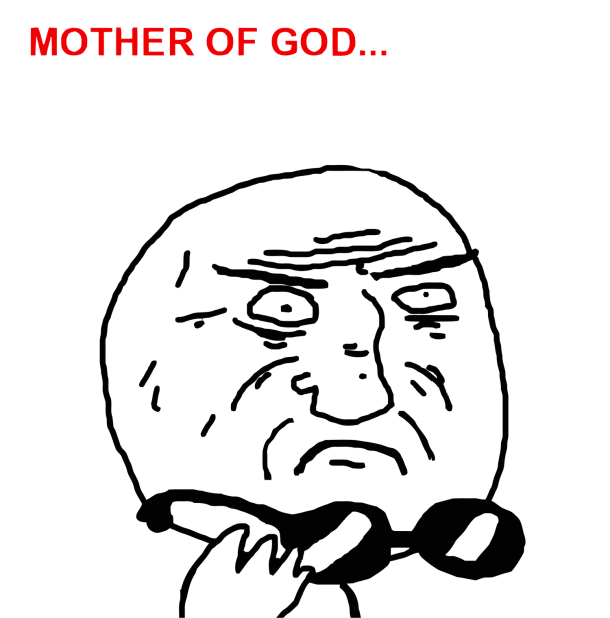 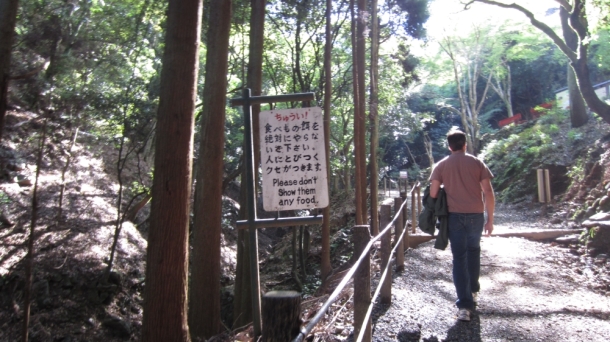 Napkin was keeping a pretty steady pace ahead of me and kept looking back to ask if I was okay. I had too much pride so I kept giving him a reassuring “thumbs-up-nothing’s-wrong-bro” when realistically I was starting to get winded and my feet were not happy. He also kept saying, “We need to get you better shoes!”

In my mind: “These shoes are perfect. Maybe not for mountain climbing, but they’re perfect.”

We started seeing signs warning/educating us on the wildlife and then finally we were there! At the very top of Mt. Arashiyama!

And WHOA ALL OF SUDDEN THERE WERE MONKEYS! 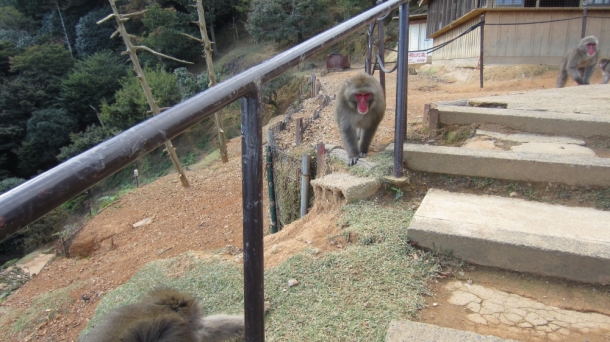 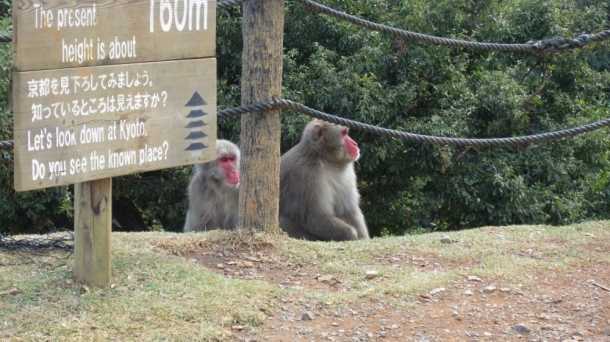 I had made it! It was all worth it! The actual monkey park is relatively small.  It’s a single building with a few rooms. But what you really need to visit the monkey park for is this: 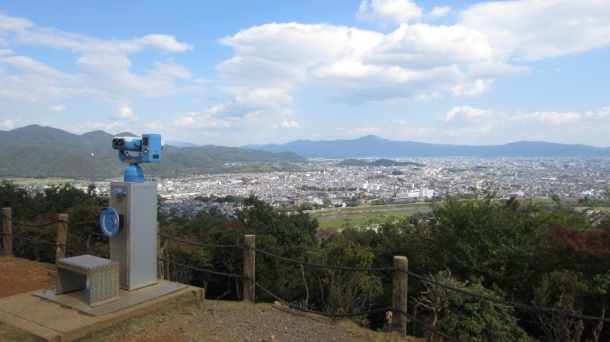 You are above Kyoto and the view is magical.

I didn’t realize that we would have such an amazing landscape of the city below us! You are left to your own devices, mostly. There are cheerful helpers that come and answer questions and things but it’s by no means a guided tour. And that was really nice.

One of the helpers asked if we would like our picture taken and we were like, “Sure!” Then all of a sudden he was beckoning a particularly extroverted macaque and we were photobombed! 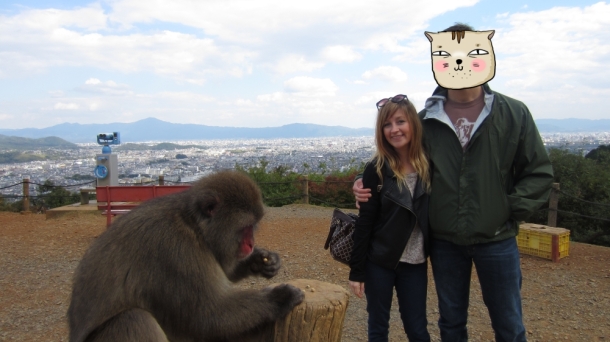 (Ahem. Napkin is uncomfortable being plastered on my blog– so from this point on, he will look like this.)

Napkin and I wandered into the building and realized that it was a feeding area! You bought little bags of apples slices and then fed the monkeys through a protective barrier. I was a little nervous about this because up the mountain we had seen a lot of signs that basically said, “Monkeys will kill you if you show them food. They will break your hands and laugh at you.” 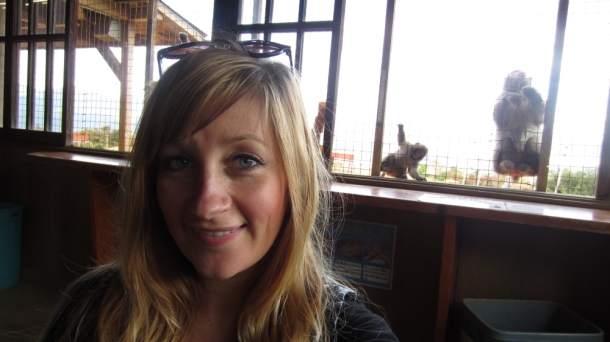 (Not nervous at all.)

So after feeding the monkeys to the point where no one wanted to see another apple slice in their lives, we decided it was time to make our way back down the mountain. (Get ready, boots.)

The way down was considerably easier. A little treacherous, sure, but nothing like going up… and we wandered around Arashiyama for a little while before catching the train to our next stop…

Next post!! Movie stars! Golden temples! A race against time! And more of THIS GUY!

***post edit: The climb to the Monkey Park was only thirty minutes or so. I was just being dramatic. : )