Let’s take it back, yall. Way back. Like two weeks ago, back. Before everything went bananas in a banana basket (gross.)

So what did I eat, you ask?

A ton. A ton of cheetos.

I think we all know where the rest of this post is going– but to spell it out for you, I partied HARD on Halloween night. Napkin and I had been really excited about Halloween because we wanted to hand out candy to our little trick-or-treating-neighbor-children. But our side project original band (that we play in together Sonny and Cher style) got a show opportunity that we couldn’t pass up so we weren’t going to be home for the night. I, of course, left our candy outside on the porch for the neighborhood kids and wrote them a poem. And it goes a little something like this, ahem,

“We’ve had to leave.
And that isn’t very cool
But, please!
Take our candy!
You goblins and ghouls!”

Now, I know that what probably happened was some teenage punk-butt came and took everything in one fell swoop, but I’d like to think that people came, laughed at my poetic genius, and politely sampled from our candy bowl. So let’s leave it at that. Even though I wasn’t going to meet trick or treaters, that didn’t stop me from putting together the perfect costume this year. 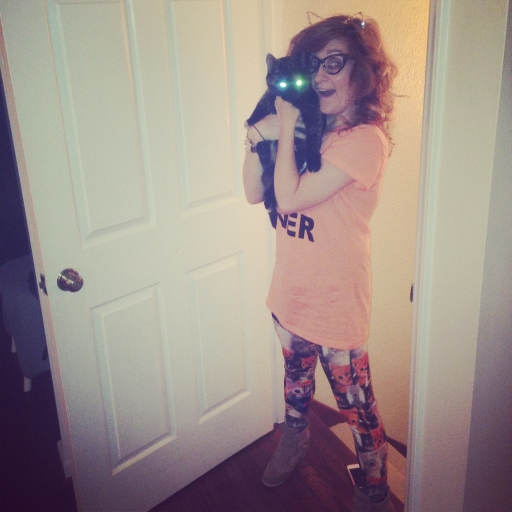 Since the show came up pretty quickly, I didn’t have a lot of time to come up with a band theme costume idea… so the boys and I decided that I would be a crazy cat lady and they would be my “cool” cat band. I used some iron transfer letters…

(You’re supposed to iron them using a bandana so, of course, I chose the coolest one I could find…)

And made t-shirts for my band members.

Since they were going to be my “cool” cat band, I had to give them names! So, for Halloween night– they were Boots, Socks and Mittens.

I completed my Crazy Cat Lady look with a ridiculous manicure…

And we hit the town.

Here we are as a band! 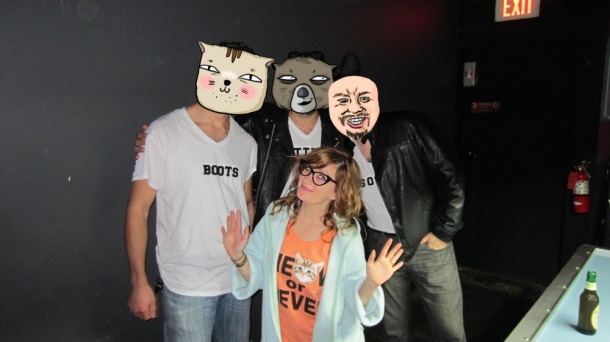 Obviously, Napkin was Boots because that is such a cute name. What you can’t see is that the band all greased their hair, wore leather jackets, smoked cigarettes and wore cat ears all night. (Aren’t those heads just terrifying?) The night was really fun until I had a lot of beers and realized that “CHEETOS ARE AMAZING!” I ate so many that I think I can still taste them and then walked around the bar letting everyone know that they really needed to eat more skittles because skittles are “ALSO AMAZING.” Then Napkin took me home and I passed out. My waist line will never forgive me.

So what will I eat this Wednesday?

The answer is nothing!

One thought on “What I Ate Wednesday!”