I was supposed to take my bridal portraits today but the weather is insane and we had to cancel the shoot. This was a mixed bag of bad because I was really looking forward to having the pictures taken and also because the photographer is one of the most awesome people I know. Sadly, no hang outs/posing for me today.

It did, however, give me some time to catch up on a few things both wedding related and not-so-wedding-related (read: real life.) After my first blog today, I was a little inspired by the awesome women in my life– and started thinking about how much I love each of them. So! I’m going to do an in-depth post about each of my bridesmaids. 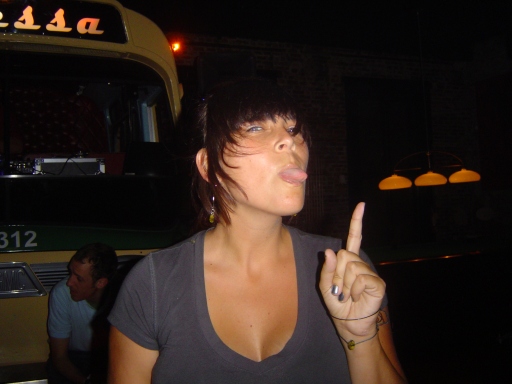 Jammer and I met in a pretty weird way. I was brand new to this little college town and a friend of mine let me use his owner number at the community co-op. So there I am, going through the line with some organic walnut flour or some other hippy food, when the cashier asks me for my owner number. I give it to her, I smile, and she looks at me like this:

“I didn’t know you lived at my house,” she says. Turns out, we had a mutual friend who was also her roommate and she was totally unimpressed by my using their house number. Needless to say, I avoided that cashier from that point on.

A few weeks after that encounter, I FINALLY broke up with the incredibly shitty dude I had been dating. I called my friend, saying I needed some company, and a little while later my doorbell rang.

THE CASHIER WAS AT MY DOOR.

Turns out, she had just had a crappy break-up too and our mutual friend had sent her over, knowing that we would hit it off. And we totally did. A month later she moved into my house and we were going out every night, rolling around on other peoples’ lawns, saying things like, “I love you the most!” and “I was such a bitch to you when we met, haha!” We’ve been best friends since then.

Jammer is one of the most amazing people I’ve ever encountered. The first thing you notice when you meet her is her super blue eyes and then her laugh. It is absolutely warm and sincere and infectious.

You will say something about some tiny European country and she can tell you where to get a good Americano while you’re there. She has toured with bands all over Europe, sailed a boat up and down the Atlantic, hopped a train… dropped everything to move across the globe and if you need her, she’ll drop everything and come right back. I was in an especially rough patch a few years ago and Jammer dropped everything she was doing (which included scoring an ultra-amazing set-up in Boston) and moved back to be with me. She never thought twice about it. She is just THERE.

When I started planning the wedding, I would go to Jammer with these specific ideas for hair pieces, cake toppers, etc– and she would say, “Oh, I can do that.” At first, I doubted her ability to replicate these specific ideas I had… but she totally went above and beyond what I expected… working super hard to make my dream come true. And she only charged me “a couple of cocktails.” She was there when I chose my dress– in fact, she helped me decide!

I am absolutely thrilled that she’ll be beside me on my wedding day… She will be the one to tell me to stop crying, that my boob is hanging out, that I have something in my teeth and that she’s proud of me. She is one of the reasons that I met Napkin, one of the most solid people I’ve even met in my life and one of the best friends I could have ever asked for.

I love you, Jammer.