I do this a lot, where I reintroduce myself and apologize for a lack of blog updates… so I’ll spare you another go-round. I do have a reason for not blogging this time:

As things have settled themselves at my new job– I found myself longing to be as comfortable as the other singers were on stage. But I have a problem with knowing what to do with my hands. Normally, I just double fist the mic stand and let everyone else be entertaining… but that doesn’t work at the theatre.

I was watching some K-pop videos after a particularly long work day and got inspired by the almond shaped acrylic nail trend. The following day I went to a nail salon nearby and had these babies applied:

So fun, right? And I was obsessed with them to the point that I would do “diva-hand” moves on stage purely so that I could see my own digits dance. On stage, they’re amazing. Texting, doing the dishes, making the bed, scratching your cat, applying make-up (or anything face-related,) blogging, typing on anything at all …not so much. I had my first wake-up call when I stuck a long-laquered nail up my nose for a quick scratch and nearly pierced my brain. After that, they were more of a bother than anything.

I kept them for three weeks, until the growth of my real nails made them basically impossible to work with. 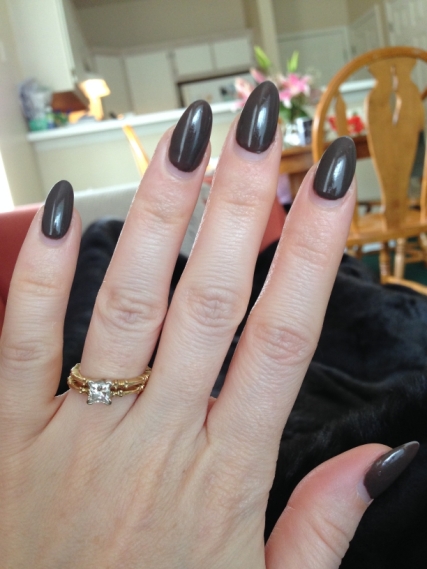 I had heard all sorts of horror stories about how getting them removed left your nails totally ruined but mine are fine. Totally paper thin but not grotesque to look at or anything. See?

So yeah. Fashion– my own vanity (and awkward stage presence) is what kept me away from you for so long.

But now! I’m short nailed and ready to fill you in on MY VERY FIRST DAY at the theatre.

It’s sort of a blur to look back on but basically, everything was lightning speed from the get go. We had one day to block the show (with me included) so I got up early (who am I kidding– I was too nervous to sleep) and went to the theatre for practice. I should mention that the entire week leading up to the show was a mess. The weather was horrible, ice was causing all sorts of accidents near my house… the south was in the throes of that weird winter apocalypse and Murl Beach was hit pretty hard. I drove six miles an hour and made it to work. I met everyone in the cast and crew in quick little spurts, and then met the costumer for the show in my dressing room. Already, my head was spinning.

I have a little corner spot in a dressing room with two (sometimes three) other girls and it couldn’t be a better mix of people. (I’ll elaborate on that later.) The costumer and I had met a week earlier to go look at some gowns for the show and so we basically just put all of them on to make sure that they still worked. I had been scared shitless for a month so I had lost a little weight– but nothing was too terribly wrong with any of the gowns and I was given a list of what to wear and when.

Then I was rushed to the stage where I ran through my songs with the band, once, and then everyone was told to get dressed and get ready for a full show run through. It all happened SO FAST.

You know that feeling when you’re trying to retain a lot of information and also trying to remember directions and trying not to think about dinner and/or falling down? Imagine that feeling but spinning. That was basically my whole day.

Hours passed like seconds and we had run through the whole show twice and worked out a few transition fumbles… and that was it. Ten hours later– we were sent home. The weather was really awful that day and so I got home and basically hunkered down for the night with a very grumpy, chilly Molly.

The next day– the weather had taken a turn for the worse. The roads were solid blocks of ice and my anxiety level was absolutely through the roof. How was I going to make it over the already scary bridge in front of my apartment and to the theatre? Was I going to be able to sing? Was I going to remember my songs? Which was stage left, again?

I could feel my stomach starting to knot when I got a phone call from the producer of the show, saying that they were closing the theatre for the night and that we would open the following day.

I can’t even really tell you how I felt. I was partially relieved and partially bummed because it was one more sleepless night I knew I would have. I spent a few hours going through the show before crashing for the night (due to total emotional exhaustion, I’m sure…) and I woke up the next day confused as to why it was two thirty in the afternoon. I had slept for 13 hours.

By the time I was at the theatre I was out of my brain and somehow…
That worked for me??

The show went pretty seamlessly for me. I remembered what I needed to do and where I needed to be and at the end of it I felt, like, good. Accomplished.
The weather was still pretty gross but had let up enough to, you know, travel. So when I got home, feeling good, feeling accomplished– I got out of my car with a little swagger…
And then promptly fell on the ice.

And that was my first day! I miss y’all! More soon!