Year two! We did it!

I’m going to disrupt my already super delayed third part of my surprise wedding photos series (or whatever that run-on sentence is supposed to say) because today is a special day! It’s our second wedding anniversary!

We actually celebrated this past weekend because of the whole, you know, long distance thing. I thought I would be cool with not doing anything today… but I can’t stop thinking about this being the actual day so I’m a little depressed. Actually, I’m moderately depressed. But! I had two fancy chocolate truffles for breakfast so everything is going to be just fine.

We kept it low key… as we have a tendency to do (see last year’s anniversary post) but it was sweet and thoughtful and just right, if not a little too short. (Again. The whole long distance thing. I know you’re tired of hearing it.)

We lulled around in bed for a while (that’s a white lie– I slept in and he made breakfast) and after watching a particularly bad episode of Sherlock (does anyone feel me on season three being a total bummer??) we decided to get dressed up to go to our favorite restaurant around these parts:

…which happens to be a take-out Chinese food place with four tables inside. Ha!

Napkin really won this year’s anniversary by getting super handsome while I opted for jeans and a blouse (that would allow for the tofu-bloats.) 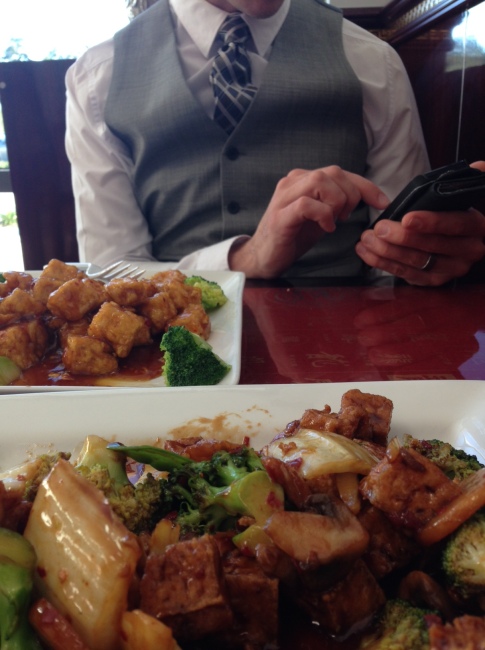 (Don’t tell him I took this picture. #sneaky.jpg)

After dinner, we wandered around the grocery store next door and I had a revelation. Napkin, who is always sweet and thoughtful, is also becoming more and more sentimental.

We were really just killing time in Lowe’s Foods when he stopped and said, “We have to eat cupcakes!” and then marched his way over to the bakery section. It would never have occurred to me to do this… but he thought it was important because we had cupcakes on our wedding day and also did the whole “one year (cup)cake” tradition thing on our anniversary where you eat cake from your wedding day that’s been hiding in your freezer. You do this for good luck. Also, you do this to make room for the frozen bags of peas you keep buying excessive amounts of.

Lowe’s Foods had a couple fabulous looking, massive cupcakes and we bought those and took them home. We decided we would end the night with another episode of Sherlock (also season three, also not good) and cupcakes. Here’s mine (which was almost too decadent:)

After the cupcakes, I started feeling like I was going to die from all the sugar intake so, around midnight, Napkin and I went to Walmart to walk around. I tried on a Wonder Woman onesie and danced around in it until I realized other people were watching. I saved a shred of my dignity, bought chapstick, and the two of us came home. Napkin laughed the whole time.

And that was about it! A pretty low-key but sentimental night of celebrating our two year mark as husband and wife.

This has been a particularly hard year for us. We were just starting to find our groove as a couple when this job (that I’m really thankful for) took me away from my hard earned life… but we are working hard, together, to make it work. We are on the cusp of making big choices that will allow for us to finally put our roots down together, I hope, for good. And if anything, when I stop and think about it, I’m moved by the fact that Napkin continues to work hard for he and I. In a way that would be really challenging and frustrating for anyone, Napkin continues to kiss me on the forehead and tell me that it’s going to be okay. And because he is such a good and devoted man, I believe him.