Man. This post might be a little weird because I’ve blogged about nothing other than Japan for so long… and so much has happened.

I guess I’ll start it with this story:

Napkin and I were a week away from getting married and things were hectic. We were doing a lot of last minute wedding planning when we got the call from our real estate agent. Napkin, knowing immediately that this was going to be an important phone call, pulled off the road and into the Whole Foods parking lot. “They agreed!” Our real estate agent said, “You’re under contract.”

I was watching him from the passenger seat like a nervous hawk and when he told me, I screamed. Napkin, in a very un-Napkin way, pulled me out of the car and swung me around in pure daylight and then we walked around Whole Foods arm in arm because we didn’t know what else to do. We were on our way to be home owners. Forever ago, I posted THIS.

That was the house we signed a contract for. I posted about all of the good things and endless possibilities but I never posted about the weird feeling I had in my gut when we met the owner. Our initial showing of the house was sort of weird because the owner wasn’t supposed to be there… but was… and so we sort of tip-toed around her and tried to keep our game faces on while we fell in love with her house. I casually disregarded all the gaudy, dusty furniture and mess and didn’t even feel that weird when we went into the master bedroom.

But then there was a shrine to her recently deceased husband.

I stared at it for a long time– I even snuck off by myself while Napkin talked to our real estate agent so that I could see it again. It was pretty obvious that he had died recently by the state of the house. His stuff was everywhere. We came to find out later than he had died of cancer three months before she put the house on the market. (We saw the house two days after it went on the market.) I immediately was disenchanted with the house. It suddenly became a sad place in my head but I tried to convince myself that we would be doing the poor widow a service by taking the house, and its weight, from her shoulders.

So you can imagine that I had pretty complicated feelings when our real estate agent called us and said that the contract had fallen through. The seller decided she didn’t want to sell the house anymore. (That’s the simple version of a pretty complicated story.)

The contract fell through two days before we got married.

But looking back?? I’m so so glad things happened the way they did. And this is why: 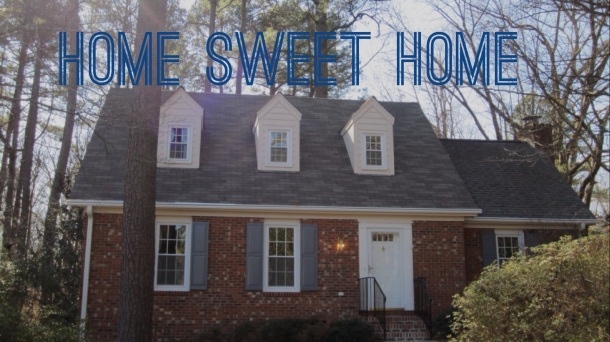 That’s right! We are now proud home owners!! And SHE IS MY DREAM HOUSE (in the making.)

We got married. We went to Japan. We came home and we got ourselves prepared and motivated to sell our apartment. Christmas time was definitely tough– as we had A LOT of showings that meant the house had to be spotless and empty in less than twenty four’s notice… but we survived.

After the contract on our “too good to be true” home fell through– finding a house became our number one priority. We saw a total of fourteen houses in two months. Our real estate agent hated us.

We had such a crazy list of things that we really wanted in a home. We wanted something close to the city, but we wanted a yard. We wanted a basement. We wanted a porch. We wanted trees. In our area, and in our budget, a lot of those things seemed impossible.

Sometime in November, my real estate agent and I went driving around on yet another house hunt. We were running out of things to talk about and were in a really lovely neighborhood– but we were both sort of bummed because the house we had driven to see was locked up and we couldn’t find a key anywhere. (Someone had apparently taken it?) We were leaving the neighborhood when we passed a for sale sign on a cape cod house nestled in a bunch of trees.

She called the real estate agency that was selling it, like, three seconds before they closed and there ended up being a hide-a-key. We were in luck!
When I walked in the house, I fell in love. And not the way I had when we walked through “too good to be true home.” It was real. It was terrifying.

She told me the price on the house and I nearly cried– but I called Napkin anyway and asked him to meet us at the house since he was getting off work soon. He came over and I saw it in his face. He knew it just like I did. Because of our previous experiences we were hesitant to get our hopes up… but after a month of negotiating and a whole lot of wishing on the universe… we sat in an office together, signing for our future.

The little dream home in the making became ours on January 25th, 2013. Has my life changed? Totally. Completely. Instead of splurging on shoes– I splurge on little odds and ends for the house. Instead of taking myself out for dinner, I go buy a three pack of GFCI outlets. I KNOW WHAT GFCI OUTLETS ARE, YOU GUYS.

But everything has also changed for the better. Our lives are fuller. Napkin and I have made home improvements our hobby together. Our friends come and crash at our house. We’ve had a party. (We have room to have a party!) I have a yard. And a garden. I’m even making a new section for this little ol’ blog!