So, this is a little bit of a back-blog. (Have you been waiting by the edge of your laptop/smartphone?) It’s pretty late in my neck of the woods but I just got the first bit of “official” promo for my new job and now I’m obsessed with the internet and what it will think of me come opening night at my new show. I had pizza for dinner so basically I’m effed in the waist-line so please love me for my talent, okay?

Anyway, last Saturday Napkin and I drove to good ole’ Murl Beach to secure an apartment. I had done some digging and Craigslist pleading and came up with a list of five apartments that I would choose from. I would normally be pickier about this sort of thing but time is of the essence and I don’t want anything other than a tiny place to call my-own-away-from-own. I was pretty frazzled and hard to be around the entire time, so props to Napkin for still wanting to hang out with me.

I had tried (multiple times) to make an appointment with the leasing office but every time (and by every time I mean the six times I called) the staff assured me that I would be fine. “Just show up whenever!” Where this would normally have made my perpetually late self pretty happy– I was worried that I was getting myself into a predicament. And that’s sort of what happened. We rolled up to the leasing office a little before noon and there was a line of people in front of us. The office was a mess. Checks were in plastic tubs, people were everywhere, everything smelled like McDonalds.

But he squeezed my shoulder and we waited for our turn. While we were waiting we sort of made fun of everyone else and realized that McDonald’s smells disgusting. When we finally met with a leasing agent, I confidently handed him the EFFING FOLDER of information they needed for a rental application and basically waited for him to be like, “Good job! You are the most prepared!”

Instead he sort of fumbled through everything, reached into a drawer, handed us keys and sent us on our way. This is what beach town living is like. They don’t NEED you. Everyone wants to live at the beach. There was no guided tour. There was no real direction. We were handed keys and shuttled out.

So Napkin and I headed to the first apartment and hated it. It was dingy and in disrepair. Then we saw another. It was loud and big and a little sketchy. Then we realized we were starving and stopped for a sandwich, laughing about the leasing office police coming to catch us. We ate way too fast. Ahem. We saw a one bedroom unit really close to my new job but it had been a weekly rental for a good-while and just didn’t really look livable for any length of time.

Then!! We found her. She is bare bones furnished. She is a corner unit on the top floor, with a little screened porch and two bedrooms. Napkin approved. She is quiet and perfect.

AND NOW SHE IS MINE.

All the turned-up-nose-attitude did nothing for me when it came to the application process. With all of the print-outs and bank statements, etc… I had forgotten a second form of ID. (#ugh.jpg)  I gave the office a check to hold (maybe that was a nutso move but there were SO many people looking at apartments that day that I got nervous.) Thankfully, a few days later everything was locked in and secured.

This was when Napkin went from normal-awesome to special-awesome. After we finished signing everything at the leasing office (shuttled out again by the still-present McDonald’s breeze) Napkin and I decided to take a drive around the neighborhood. Here are a few pictures of a beach town in the winter. From our car. They are poetic. 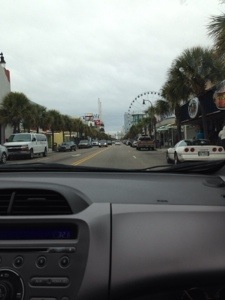 Napkin was so excited for me. He wanted to celebrate. He wanted to take a look at the theatre where I’m going to be working. And something about it was really infectious and sweet. I could tell he was a little sad, too…but he just let himself stay happy. For us.

We drove around for what seemed like six hours trying to find an ice cream parlor (in the winter. at a beach town.) and when we finally found one we had a hilarious little celebration in a nearly empty shop with a ninety year old woman, a super loud TV and a heavy bleach smell.The ice cream was pretty good, though. 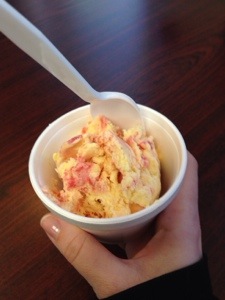 We left Murl Beach excitedly talking about the move. We came up with a list of things I needed to buy before moving in and he held my hand the entire four hour ride home. He told me he was proud of me. When we got back to town, in an effort to keep the party going, he took me out for Chinese food and we came home and watched cartoons until we couldn’t keep our eyes open anymore. Napkin, single-handedly, turned something that could have been stressful and sad into a perfect, sweet memory for me to hold onto when things get weird and lonely. Part of me wants to be like, “DUDE! STOP BEING GREAT SO I CAN MOVE, OKAY?” But most of me is just thankful to have his support while I chase my dream. In ways you couldn’t possibly imagine, I would never, ever have been able to do this without him.

One thought on “New Digs”